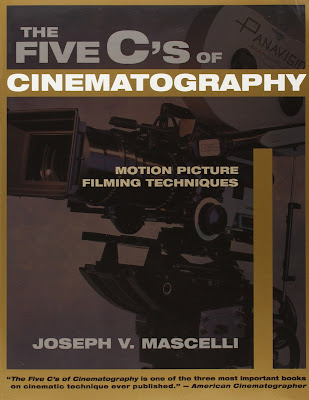 There are many great books on filmmaking, today I’d like to mention one particular book that keeps getting my attention and admiration: The Five C’s of Cinematography: Motion Picture Filming Techniques by Joseph V. Mascelli.

According to American Cinematographer the Five C’s is one of the three most important books on cinematic technique ever published. That should count for something!

Camera Angles:
Camera angle refers to the angle at which a camera is positioned when filming. High-angle shots look down on a subject. Low-angle shots aim up at a subject to make the subject appear big and dominant in the screen. Wide shots are used to capture a subject's surroundings and often are used when establishing a scene. The various angles are chosen to help explore a film's narrative development.

Continuity:
Continuity is the consistency of a film's static and dynamic elements. A film must flow naturally to make sense to a viewer and shots are recorded avoiding inconsistencies in characters, plot or subject matter. Continuity means that clothing, sets and objects are not suddenly altered between shots in the same scene. It also means that characters sustain consistent personalities and that objects do not suddenly change, appear or disappear.

Cutting:
Cutting is how shots are organized in sequence. It's important to create a series of shots that flow naturally into each other. This means viewers are unlikely to follow or be affected by a film when its shots do not follow naturally. One example of a cutting technique is cross-cutting. This is when a camera moves from one scene of action to another to show two events taking place simultaneously. Cutting on action is another technique where one shot finishes on an action that leads to the next shot.

Closeups:
Closeups are detailed shots of a subject. Small details in these shots appear large on a movie screen. There are different degrees of closeups, including medium closeups and extreme closeups. Over-the-shoulder shots are a type literally filmed over a subject's shoulder toward another subject, usually done during a conversation. Closeups also move away from the action of a shot to show intimate details of a subject's emotions or draw attention to specific objects.

Composition:
Composition refers to how images in a shot are arranged and organized. In other words, composition is the visual order of a shot. This includes how a shot is balanced, or arranged in the frame, to draw viewers' attention to particular subjects or objects. The space, colors, balance of light and dark and other visual elements are other important aspects of a shot's composition.

The book was first published in 1965 and I don’t think it has been updated much since then. Yet the concepts are so good, effective, and clear that the content has become timeless.

It's rather dense (244 pages), but it's still one of the best books on cinematography I've read so far. It equips the cinematographer with a better understanding of why certain visual/technical choices work over others. With the aid of photographs and diagrams, this text concisely presents concepts and techniques of motion picture camerawork and the allied areas of film-making with which they interact with and impact. Included are discussions on: cinematic time and space; compositional rules; and types of editing.

The book may be dated, but the advice is timeless. Definitely worth owning and reading/re-reading for anyone aspiring to be in the film industry. Much of it's advice is even worthy of non cinema enthusiasts.

There is not a single wasted word, example or illustration in this book. It is jam-packed with practical insight, technique, and tastefulness. Even if you don't intend to work in this medium, this book will enrich the way you watch films.

This book is rich with insights. For any filmmakers, I strongly recommend this book!